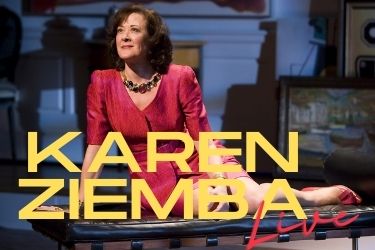 Monday, August 2 at the Cape May Convention Hall

Tony-winning actor-singer-dancer Karen Ziemba returns to Cape May Stage! Join one of Broadway's most versatile and beloved performers as she performs Broadway Classics like never before.
Cape May Stage's Broadway Series is back and bigger than ever!

Tony-winning actor-singer-dancer Karen Ziemba is one of Broadway's most versatile and beloved performers. Karen received the Tony Award - along with the Drama Desk and Outer Critics Circle awards - starring in Susan Stroman and John Weidman's hit musical, Contact, at Lincoln Center Theater. On and Off-Broadway, Karen has played murderers and marathoners, a daughter of the West, to the daughter of an American president. She starred as "Roxie Hart" in Kander and Ebb's Chicago, and "Rita Racine" in their Steel Pier (for which she received her first Tony award nomination as well as Drama Desk and Outer Critics Circle nominations), and starred in the new Gershwin musical, Crazy For You.